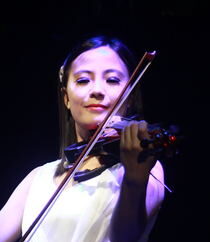 Clair (He) Tang began studying violin at the age of 6. By high school, she would go on to study under the tutelage of Professor Zhang Chengye of Nanjing’s University of the Arts. Later, she received her Bachelors of Arts in violin from Xiamen University’s Music department. During her second year of university, she interned at Xiamen musical theatre orchestra’s (Xiamen symphony) first violin section and retained employment in the second violin section with the orchestra after graduation. Since 2006, she has taught violin, composition and music theory to countless students aged 3 – 65 years.

By 2010, Clair became one of Xiamen’s premier contemporary violinists performing both as a soloist and on stage in conjunction with some of the East Asia’s most prestigious performers such as jazz pianist Miao Zi, Taiwanese jazz saxophonist Cheng-Yu Lee, and Rock Record’s group Yu Hou Nan Li. Over the years she has also engaged in studio work for most notably MojoStone recording studio, Fang Yu Cheng music studio and Shi Yin Guang Nian recording studio.